Sixth week coding my Google Summer of Code project with Red Hen Lab. I decided to use the time to go into the dialect identification task while the training process of the speech recognition system takes its time. In this post, I’ll briefly go through the data, then I will illustrate the method I am using to build the dialect identification model.

Multiple models were tested by the authors of the MIT-QCRI system [1].

As an example example, consider a Siamese neual network with two identical subnetworks. The network accepts two feature vectors at a time, each is input to one of the subnetworks. This leads to the same insight being extracted from both feature vector (remember that the two subnetworks are identical), which results in comparable information.

The authors of the MIT-QCRI system propsed a Siamese neural network with two parallel convolutional neural networks. The input to this network is a pair of i-vectors. The first i-vector is extracted for the utterance whose dialect we wish to identify. The second i-vector is the i-vector representing the dialect itself. This vector is called the i-vector dialect model. To calculate this model, the following equation is used. \[ \overline{w_d} = \frac{1}{n_d} \sum_{i=1}^{n_d}w_i^d \] Where \( n_d \) is the number of utterances in this dialect, and \( w_i^d \) is utterance \( i \) in dialect \( d \). To use the development data for adaptation, the authors used an interpolation approach: \[ \overline{w_d^{Inter}} = (1 - \gamma)\overline{w_d^{TRN}} + \gamma\overline{w_d^{DEV}} \] where \( w_d^{TRN} \) is the training set, \( w_d^{DEV} \) is the test set and \( \gamma \) is the interpolation parameter. The authors also used a recursive whitening transformation [2] on i-vectors. 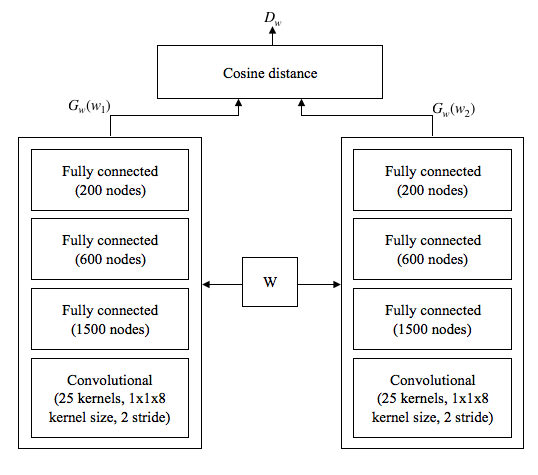